WARNING: Android devices are NOT open

The world is excited about Google's new operating system for mobile phones. But I am not such a big fan anymore since I talked to Rich Miner, Head of Mobile Platforms at Google. We met yesterday in Munich at the Communication World 2008 where he presented the Android. The system is not as open as I hoped. People will need to jailbreak and unlock their Android smartphones, like iPhones, if they want true freedom and make the most of them.

Of course the Android source code is free and you can develop everything based on it. But then? You don't get your new OS on that Android phone!

If you want, you can redesign the entire Android operating system and eliminate every Google function, even the kill switch for unwanted software. Our German readers at Areamobile.de are worried about their privacy, many refuse to connect to Google's servers with their location aware Android phones. But the first device on the market, T-Mobile G1, does only work with a Google account. "You must sign in to your existing GMail account before you can do ANYTHING with the phone", writes jkOnTheRun. Big brother could be watching you! Therefore it would be preferable to have the choice to get an Android phone that's free of Google. I want my own GPhone, not a Googlephone but a Goebelphone! 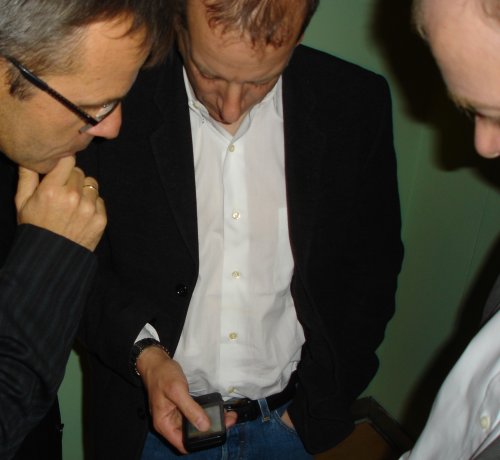 Rich Miner shows his T-Mobile G1 at Communication World 2008 in Munich
"That's perfectly possible", Rich Miner told me. You can do whatever you want with the source code. "But will I be able to install my own Android version on a T-Mobile G1?", I asked. "No that's not possible", he answered. "You would have to change the ROM." People cannot change the Linux kernels of the Android devices which went on sale today. They can install every additional program, but Google controls the core system on the ROM. That's against the Linux philosophy and a big difference to the other open Linux device, Openmoko. As a Linux user I am used to bake my own kernels. I remove kernel functions that I don't need to make my computer faster. Or I add new features, such as virtualization, to the kernel.

With Android devices that's not possible. Only a handful of developer devices can do that, but they are not for sale to end users. So if you want to run your own fork of the Android operating system on a cell phone, you have to get a rare developer device or become a handset producer like Motorola or HTC. That sucks! Also: The marvellous G1 is locked to T-Mobile's network in the US and doesn't work with German SIM cards.

My take: It won't take long until we see a flourishing jailbreak and unlock scene, as we already know it from the iPhone. The Android system is not really open before I can bake my own kernel for the device and use it on every network. I asked Rich Miner what Google thinks about jailbreaking the G1 and he just returned: "Why would you want to do that if you can install every software?" Unfortunately I didn't find a good answer in this moment. But I should have said something like: Because it's human to reshape devices for unintended use. It's part of our DNA since the first monkey realized that fruits are not only food, but can make a good booze if you let them mature a little longer. Maybe Google doesn't even know what's coming their way, sometimes they are surprised at what people do with Android. That's what I learnt from my interview with Mike Jennings, Google's Android Developer Advocate, on September 17th at OSiM World in Berlin. He was astonished when I told him that I was running Android on my Nokia Internet Tablet since Juli. "That's not possible because the source code is still not free", he said. But yet there was an idiot-proof installer available on the internet.
at 5:44 PM